Cushing’s Disease mostly affects middle-aged and older dogs. It’s a difficult condition to diagnose and treat because its symptoms are so similar to other canine health conditions.

There are two major types of Cushing’s Disease. The most common of these is caused by a benign tumour in the pituitary gland which is situated at the base of the brain. This is known as Pituitary Dependent Hyperadrenocorticism or PDH. PDH results in some 85% of Cushing’s cases.

A tumour in one (and sometimes both) of your dog’s two pituitary glands results in some 15% of cases. This is known as Adrenal Dependent Hyperadrenocorticism or ADH.

A third type of the disease, Iatrogenic Cushing’s Disease, is caused by prolonged use of steroids.

A major cause, perhaps the predominant cause of Cushing’s Disease, is considered to be over vaccination. Either of the patient dog itself or of its parents. If this hypothesis is correct, it is a shocking indictment of the veterinary profession!

Once your vet has diagnosed which type of Cushing’s your dog has, treatment will comprise either regular medication, surgery or perhaps a combination of the two. Those are out of your control. But what you can control is your dog’s diet.

As a canine nutritionist, I highly recommend you switch your dog to a homemade diet as the best method of improving your dog’s condition!

Cushing’s Disease in dogs, like most canine health conditions, reacts well to an improved diet. And just as a fresh food diet is healthy for we human beings, it’s also much healthier for our dogs.

Alternatively, if you would like a one-to-one consultation, I would be more than happy to work with you to try to improve your best friend’s condition. 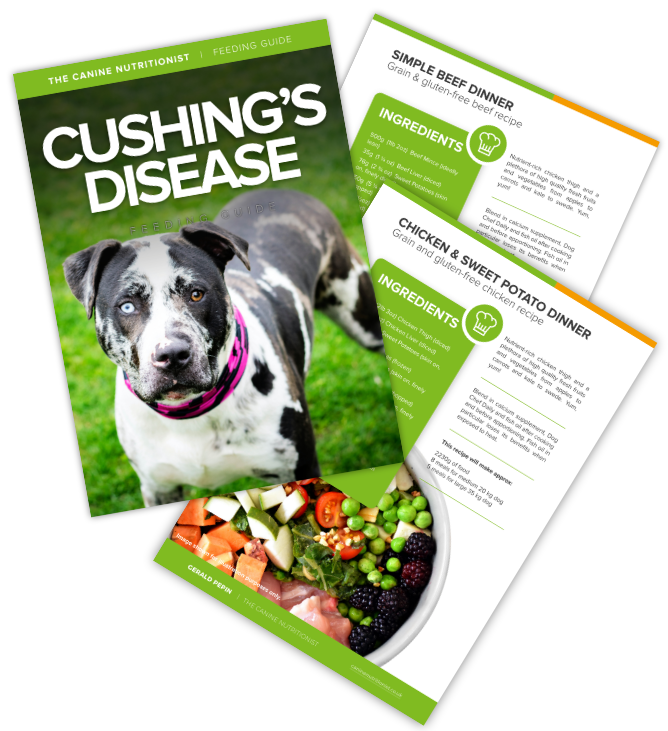 If you feed your dog kibble (dry dog biscuit), that is the first thing that needs to change. Dry commercial dog food is inherently unhealthy. Made with byproducts, unhealthy additives and unnatural preservatives, commercial dog food is responsible for a huge percentage of modern canine diseases. If you want your dog to recover and to live a normal healthy life, you should endeavour to feed a proper wholefood diet.

Commercial prescription diets are not the answer. They are still nutritionally compromised, highly processed synthetic products. You need either to consider adopting a raw diet for your dog or change to lightly cooked homemade food. Nothing else will do!

Providing your dog with a moderate to low fat, protein-rich, low-carbohydrate diet should benefit greatly. This is known as a low glycemic diet.

Such a diet should help balance the sugar levels in the bloodstream and help avoid dangerous sugar spikes which overtax the adrenal glands. At the same time it should provide a varied, healthy, natural and easily digestible diet. This is far more than any commercial diet can possibly do.

With healthier, more natural ingredients with fewer refined carbohydrates, a homemade or raw diet is so much better than highly-processed commercial dog food for your Cushing’s dog. Whatever the pet food industry might tell you!