If your dog is suffering from canine epilepsy, improving its diet can have a dramatically positive effect. A properly formulated dog epilepsy diet can go a long way to improving your dog’s condition. But what is canine epilepsy and exactly what are its implications for your pet?

Canine epilepsy is a chronic (long-term) condition that causes repeated seizures, convulsions or fits in dogs. It is the most common long-term canine neurological disorder and affects around 1 in 130 dogs in the UK. It generally affects dogs in the age range of 6 months to 6 years.

In the majority of cases, canine epilepsy is a lifelong disease. That said, all is not necessarily lost. This dog epilepsy diet guide is designed to help your dog if he or she is suffering from epilepsy.

In the case of idiopathic epilepsy, the cause is often considered genetic. Idiopathic epilepsy generally affects young to middle aged dogs, and is often presumed to be caused by a combination of genetic and environmental factors. Certain breeds are considered more predisposed to epilepsy than others.

In the case of structural epilepsy, the problem can be caused by poor blood supply to the brain, inflammation, infection, developmental problems and, in the case of senior dogs, degenerative brain diseases.

A third cause of canine epilepsy is known as reactive epilepsy. This is generally temporary and results from the likes of ingestion of toxins or trauma such as a blow to the head.

In most cases, there is no cure for canine epilepsy. It is generally treated with anti-epileptic drugs (AEDs) with the aim of minimizing the frequency and severity of attacks. But there is another way to help control your dog’s seizures. A dog epilepsy diet!

Naturally, you cannot deviate from your veterinary professional’s recommended drug therapy treatment. But there is increasing evidence that diet might help improve seizure control. And I am not talking here about yet another commercial so-called ‘prescription diet’ dog food. I am talking about a natural, fresh, wholefood diet.

Commercial prescription diets are not the answer. They are still nutritionally compromised, highly processed synthetic products. You need either to consider adopting a raw diet for your dog or change to lightly cooked homemade food. Nothing else will do!

Providing your dog with a moderate to low fat, protein-rich, low-carbohydrate diet should benefit greatly. This is known as a low glycemic diet.

Such a diet should help balance the sugar levels in the bloodstream and help avoid dangerous spikes. At the same time it should provide a varied, healthy, natural and easily digestible diet. This is far more than any commercial diet can possibly do. 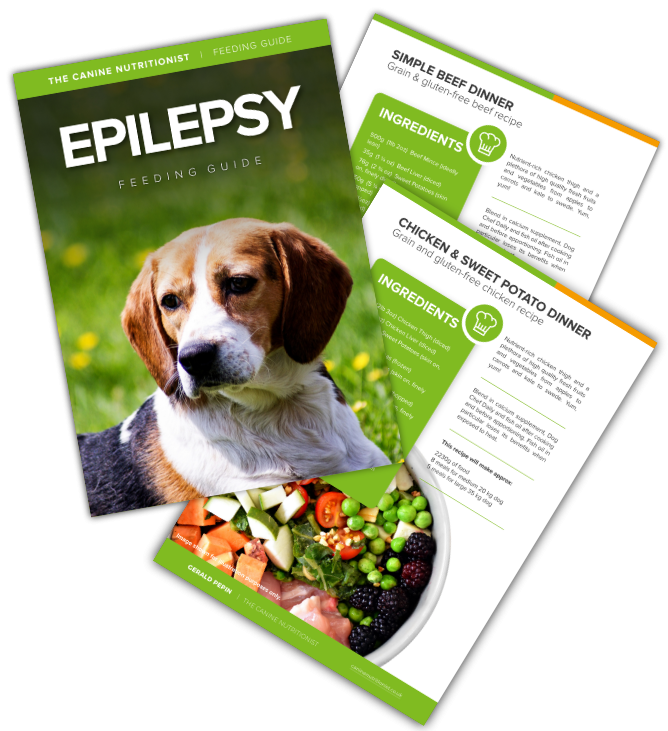 There are many who believe that incidence of immune deficiency health problems have increased in modern times due to over stimulation of the immune system caused by an increase in unnecessary vaccinations. This can cause the development of a hyperactive immune system in some dogs.

Most vets today insist on annual vaccinations for dogs despite strong evidence that at best, dogs only need revaccinating every three to five years. A great many holistic veterinarians consider such annual boosters not only unnecessary but in many cases positively harmful.

I personally consider their many side-effects way outnumber their benefits. And I count myself among a growing number who never have their dogs vaccinated after their initial course of vaccinations. Instead, I rely on a good, healthy and natural diet to keep my dogs well. As a canine nutritionist, I recommend you do the same!

As human beings, we don’t have ourselves or our children inoculated every year. Why should we treat our canine children any differently? Especially when there’s strong evidence to indicate that those vaccinations are both unnecessary and potentially damaging to the health of man’s best friend.

Since there is strong evidence that over-vaccination can exacerbate the situation, I would recommend you stop all annual injections. Naturally consult your vet, but that is my recommendation!

As a canine nutritionist, I understand the role that diet plays in the health of man’s best friend. A healthy, fresh food diet can go a long way towards improving most health conditions. And canine epilepsy is no exception.

Because evidence suggests that carbohydrates can increase seizure activity in dogs, my Dog Epilepsy Feeding Guide is based on a low-carb, low-glycemic diet. It’s available for immediate download and comes complete with recipes.

If however you would prefer a one-to-one consultation to help control your dog’s seizures, please book a consultation and we’ll work together to make your dog’s life happier and more comfortable.