Bladder stones or uroliths are an increasingly common occurrence in domestic animals such as cats and dogs. Rock-like collections of minerals that form in the urinary bladder in varying sizes and numbers, they can occur as a number of large stones or as collections of smaller stones or crystals.

Symptoms where they do occur include:

Other symptoms include lethargy, vomiting and lack of appetite.

There are in fact several types of stones. Struvite (generally caused by infection), calcium oxalate, urate, silicate, cystine and calcium phosphate. All of these are caused by metabolic abnormalities such as liver disease, dietary nutrient imbalances or genetic (hereditary) conditions. Struvite and calcium oxalate are the most common types of stones.

In more than 98% of cases, struvite stones are caused by bladder infection. Instead of being passed in the urine, salt collects around the bacteria in the bladder forming crystals. As time goes by, these become larger and larger and can ultimately form stones.

Certain dog breeds seem to have a greater disposition towards developing struvite stones than many breeds of dog. These include the Miniature Schnauzer, Bichon Frise, Shih Tzu and the Cocker Spaniel.

That having been said, according to a study carried out by the University of Michigan’s College of Veterinary Medicine between 1981 and 2007, some 25% of cases involved mixed breed dogs.

At greater risk would appear to be small female, dogs between the ages of 4 and 8 who are prone to bladder infections. (Some 85% of cases of struvite stones affect female dogs, and only 15% affect male dogs).

Struvite stones are generally caused by urinary tract infections. They can invariably be treated without veterinary intervention (without surgery) and normally without dietary adjustment.

They most certainly do not need a long-term commercial urinary prescription diet. Such diets have a number of potential side-effects including heart, kidney or liver failure, high blood pressure (hypertension) and pancreatitis.

Acidic urine helps prevent bladder infections. Since meat is the best and most natural producer of acidic urine, a homemade meat diet (as opposed to a dry commercial diet), might help prevent struvite stones ever forming. Even if your dog does develop another urinary infection!

Of course a raw diet will also have the same effect. That having been said, since in the vast majority of cases struvite stones are caused by infection, a change of diet is not necessary, but controlling future infections is!

Incidentally, it is recommended that you use only distilled (steam-distilled) water in order to prevent extra mineral intake. And avoid shop-bought chicken bone broth which frequently contains high amounts of sodium. Chicken bone broth is simplicity itself to make. 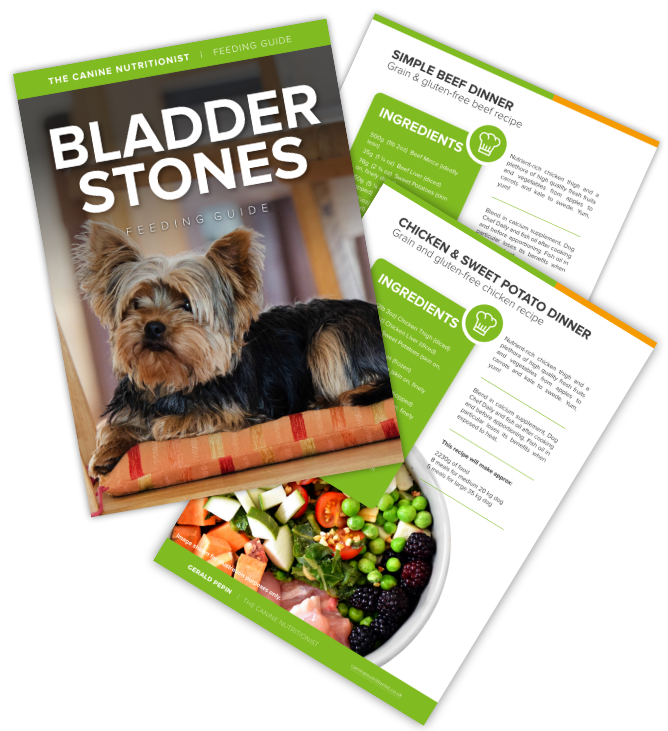 Bladder infections cause most struvite stones. But calcium oxalate stones are more likely to occur in overweight, under exercised, neutered or spayed dogs fed on dry commercial food.

Some synthetic nutritional supplements such as vitamins C and D are also believed to be contributory factors, as is a diagnosis of Cushing’s disease which is also known as hyperadrenocorticism.

There is also a higher than normal incidence of calcium oxalate stones in mixed breeds, probably because small breeds dogs are more prone, and many small breed dogs, including a large number of those listed above, are used in forming today’s mixed breed dogs.

Traditionally, calcium oxalate stones have been considered irreversible and treatable only by surgery. Conventional wisdom had it that such stones could not be affected by either food or other medical treatment so surgery was the only option. But in addition to requiring surgery to remove such stones, in some 60% of cases, calcium oxalate stones would recur within 3 years, necessitating yet further surgery.

Modern research however has shown that calcium oxalate stones can in fact be treated effectively in many cases purely by dietary means. Not by the use of commercial urinary diets, I might add. But by feeding your dog with fresh wholefood ingredients. Homemade dog food for bladder stones!

My Bladder Stones Feeding Guide will help you formulate a healthy homemade diet. Healthy dog food for bladder stones. But if you need further dog nutritionist advice, do please contact me for a consultation.