If your dog is suffering from canine pancreatitis, changing its diet to a healthier and more appropriate diet is essential. You need proper dog food for pancreatitis if you want your pup to be well again!

What is the pancreas?

The pancreas is a small, hormone-producing, glandular organ that sits in your dog’s abdomen adjacent to its stomach. It fulfills two vital roles.

As part of your dog’s digestive process, it produces pancreatic enzymes which help break down fats, starches and proteins so they can be absorbed by the body. It also produces hormones such as insulin and glucagon which help regulate blood sugar levels.

What is canine pancreatitis?

Pancreatitis, literally ‘inflammation of the pancreas’, is a painful and potentially life-threatening condition. The pancreas leaks the digestive enzymes which normally break down your dogs food. This effectively causes the pancreas to ‘autodigest’ or start eating itself. It is the most common canine pancreatic disease.

Pancreatitis is typically termed in one of two ways.

From a clinical point of view, this distinction is of little significance. The initial symptoms are still likely to be the same. Only clinical testing will determine whether permanent damage has taken place indicating chronic pancreatitis. Or if the disease is acute and most likely caused by a dog suddenly eating more fat than its body can cope with. That being the case, the condition is relatively easily rectified by making a permanent change to a healthy, low-fat diet.

Because of their close proximity to the pancreas, the kidneys and liver can also be affected by pancreatitis and chronic cases can even result in multi-organ failure!

There are a number of potential causes of canine pancreatitis. Some consider the disease to be idiopathic. Something that happens for no apparent reason. But the disease is most typically associated with a poor diet. The highly-processed, high-fat, high-carbohydrate dry commercial dog food known as kibble.

Pancreatitis has also been related to scavenging of course. Particularly where fatty foods are concerned. The introduction of a large volume of high-fat leftovers into a normally bland diet by misguided pet parents particularly around seasonal holidays is a prime example of that. For a veterinarian, this would present a classic case of acute pancreatitis brought on by what the profession would term ‘dietary indiscretion’!

Obesity, traumatic injury and stress can also play a part in the development of canine pancreatitis. So too can a sedentary lifestyle. And age can play a part too. It’s said to be more common among older, overweight and relatively inactive dogs, more commonly among females than males. Other causes can include toxins, certain drugs and endocrine diseases such as hypothyroidism and Cushing’s Disease.

Conversely, any dog suffering from any of those diseases is likely to be predisposed towards developing pancreatitis in addition to their endocrinal condition.

Certain breeds of dog are considered to be more susceptible to pancreatitis than others. Those breeds with a considered genetic predisposition to the disease include:

The most common symptoms of canine pancreatitis can include:

However, the symptoms of canine pancreatitis can be vague which can make the condition difficult to diagnose. The most commonly reported symptoms, anorexia, vomiting, lethargy, abdominal pain, dehydration and diarrhoea can be indicative of so many illnesses! 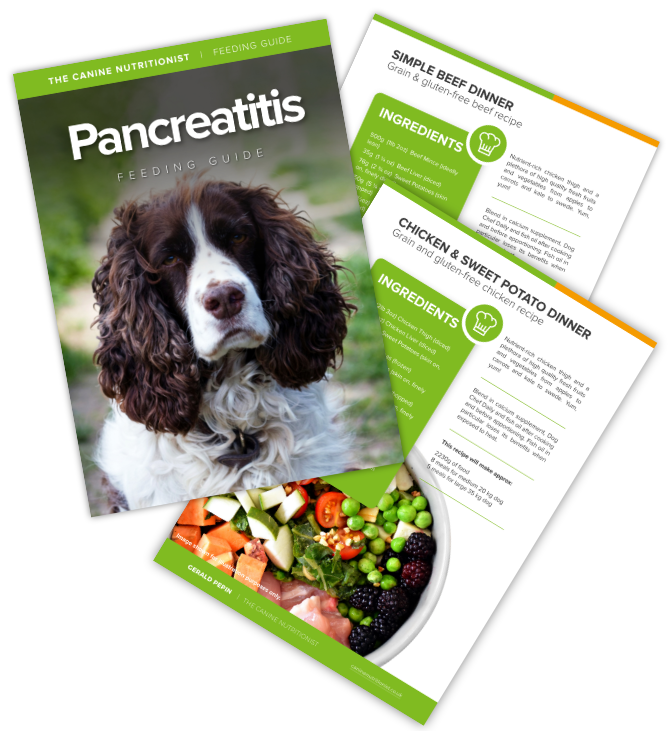 Naturally if you suspect your dog is suffering from something as serious as canine pancreatitis, you should immediately contact your vet. It can be life-threatening and you don’t want to take any chances.

So if your best friend is vomiting repeatedly, refusing to eat, walking around restlessly with his or her back arched in the air or simply refusing to get up, contact your vet right away!

Initially, your vet is likely to want to establish whether or not there is a history of dietary indiscretion. Such a history combined with abdominal pain and repeated vomiting would be clear indicators of pancreatitis. But invariably the symptoms are more non-specific. Diagnosis is made even more difficult because dogs have a considerably higher pain threshold than do we human beings.

After various tests to confirm the diagnosis of pancreatitis, your vet is more likely than not to suggest a highly-processed prescription. A so-called low-fat diet supplied by whichever commercial manufacturer the practice is affiliated to. Whichever brand they stock and sell. But there are a number of things you should be mindful of.

Most vets are not trained in small animal nutrition. They are also business people who need to make a profit in order to remain in business. There is also the fact that in addition to being considerably more expensive, prescription diets are still likely to contain way too much fat. Despite what the manufacturers might tell you on the packet!

The fact is that a great many cases of canine pancreatitis are caused by dry commercial dog food in the first place. That being the case, it surely seems counterintuitive to simply replace one dry food with another!

Pancreatitis can generally be reversed with a healthy homemade diet made with a limited range of easy-to-digest, grain-free ingredients. In fact it’s one of those canine health issues that can most easily be addressed purely through dietary change. Without further expensive medical intervention!

If you want to take responsibility for your best friend’s health yourself rather than handing that responsibility to someone else, I offer a canine pancreatitis feeding guide which is available for immediate download. It will teach you how to make dog food for pancreatitis for your own constant canine companion.

Alternatively, if you would prefer a one-to-one consultation for your best friend, I would be more than happy to help your pup along the road to recovery.