Many people today speak of food allergies and food intolerances as if they are one and the same thing. While some of the symptoms can be the same, the two are actually quite different.

A food allergy can be described as an immune system reaction which affects various organs of the body. These include the largest organ of all, the skin. Dogs food allergies account for about 10% of all dog-related allergies. A surprisingly small number that I know from experience surprises many people!

A food intolerance on the other hand is unrelated to the immune system. It’s generally less serious and is frequently limited to relatively minor digestive problems such as the occasional bout of diarrhoea. Of the two, food intolerances are by far the more common, while food allergies are the least understood. What will surprise many is that grains are not the most common cause of food allergies in dogs. That dubious honour is reserved for proteins such as beef and chicken.

Underlying cause of many dog health issues

Food allergies and intolerances may be the underlying causes of many of the health problems affecting our dogs today. Allergies and intolerances created by avaricious dog food manufacturers using cheaper and cheaper ingredients. The by-products of human food production. And bulking them up with chemical additives which are, by and large, the waste products of the oil and gas industries.

Pet food legislation aids and abets commercial dog food manufacturers by not forcing them to be specific in relation to the ingredients they use. And it permits them to use lower grade, cheaper and potentially less stringently tested sources of raw materials. It also allows them to vary these raw materials at will, which seems just as bad to me.

“Animal derivatives” for example doesn’t describe what part of an animal has been used in the manufacture of a particular product. It doesn’t even specify which animal has been used in that product’s manufacture. As a result of this, if a dog does develop a food intolerance on a commercial diet, it’s far more difficult to determine what specific ingredient is causing the adverse reaction.

This is considered by many to be the major cause of food related allergies in dogs. It’s no coincidence that the most commonly problematic ingredients are those ingredients most typically used in low-grade commercial dog food. A dog may not necessarily have an allergy to, say, chicken or beef per se. But it may develop an allergic reaction to those protein sources because of the poor quality of the chicken or beef used in its food. Which is not helped by the subsequent manufacturing processes of course. These include the chemical intervention used to turn those poor quality proteins into commercial dog food. 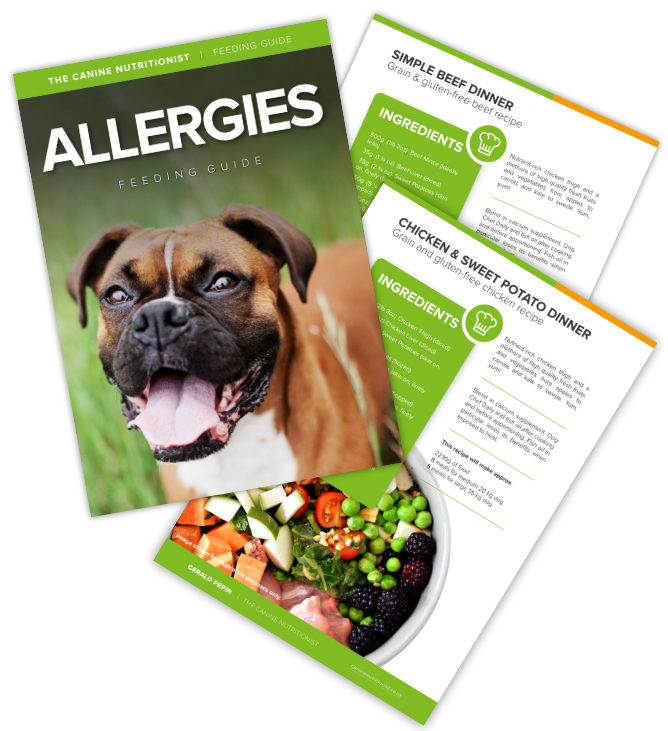 By inference, a dog only exposed to proper chicken is far less likely to develop an allergy to chicken. It’s the same with any dog who has the benefit of a varied diet. Any dog forced to eat exactly the same food year in, year out for the entirety of its life, can develop an allergy to that food in time. It’s exactly the same with humans. Even if it takes many years as is sometimes the case.

For any dog who does develop a food related allergy or intolerance, the only reliable method of diagnosis is a food trial. This is followed by an elimination diet. That essentially means changing the dog’s diet completely to previously unused protein and carbohydrate sources for a period of up to 12 weeks. If and when the problem subsides, the dog’s original food ingredients are reintroduced one at a time in an endeavour to identify the culprit ingredient. This is the only long-term solution to the problems of dog food related allergies or intolerances.

All that having been said, if a dog is fed a varied, homemade diet, food allergies are much less likely to occur. And any intolerances are likely to be restricted to the odd bout of tummy trouble. Just as any of us are likely to suffer if on the odd occasion we over indulge in a little too much spicy food!